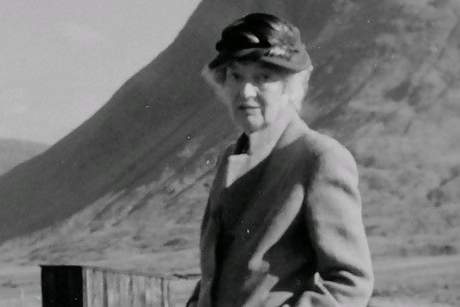 As possibly the first British-born woman to make the Haj pilgrimage, Lady Evelyn Cobbold blazed a trail for others to follow. Alasdair Soussi looks at the life of the Scottish noblewoman, also known as Lady Zainab, who embraced Islam

She was buried in accordance with the principles of Islam on a distant hillside on her estate at Glencarron, Wester Ross, in the Highlands of Scotland, on a bitter day in January 1963. Britain was in the grip of a vicious winter. A lone piper, shaking from cold, played MacCrimmon's Lament while an imam, who had travelled from London to perform the burial rites, stood firm against the biting Scottish chill as he recited verses from the Holy Quran. It was an extraordinary moment for one of the most remarkable women of 20th century Britain.

Born 145 years ago, Lady Evelyn Cobbold, who, in 1933, became possibly the first British-born woman to make the pilgrimage to Mecca, was a Scottish aristocrat, a Mayfair socialite, an accomplished angler and renowned deerstalker. Most incredibly of all, she was not only literate in the Arabic language but also claimed to be a Muslim for as long as she could remember, taking the name Lady Zainab as her Muslim name. Her groundbreaking journey to the Arab world's holiest of places cemented her unique position as a British woman who considered herself a Muslim living in a western society.

But her overall contribution to western understanding of Islam and the east almost faded into obscurity and was only brought back into the public sphere four years ago, with the re-release of her book Pilgrimage to Mecca. Originally published in 1934, the volume documents her physical and spiritual passage to the very heart of the Islamic world.

She was born Lady Evelyn Murray in Edinburgh on July 17, 1867, the eldest child of the Scottish peer, Charles Adolphus Murray, 7th Earl of Dunmore, and Lady Gertrude Coke, daughter of the 2nd Earl of Leicester. Suffering from a heady degree of travel fever, the young Lady Zainab's perennially hard-up father was forever dragging his family off to the more exotic climes of North Africa where, surrounded by domestic servants of Egyptian and Algerian origin, she spent her childhood winters and was fully immersed in the ways of Islam and Arab life and traditions.

Lady Zainab met John Dupuis Cobbold, a member of a wealthy brewing family from eastern England, in Cairo. There, they married - when Lady Zainab was at the relatively (for then) late age of 24 - in April, 1891. Three children followed between 1893 and 1900, but a life of domesticity in her husband's home in Suffolk was not congenial to a woman who, so steeped in the sights and sounds of the east, had already developed more exotic tastes than the English county's comparatively sedate surroundings.

Though she was able to indulge her lust for travel after her marriage, by the turn of the century she was travelling without her husband. In 1912, Lady Zainab published her pro-Islamic, Wayfarers in the Libyan Desert, and with her attentions now very much turned to her travels in North Africa, it was clear that her attachment to the Middle East and to Islam was less a keen interest and more a way of life.

In 1922, she and her husband separated - but never formally divorced - and Lady Zainab received a substantial financial package, including the deer forest of Glencarron. Now independently wealthy, Lady Zainab spent much of the 1920s hunting game but it wasn't until the death of her husband in 1929 that she committed herself to making the greatest of all journeys for a Muslim, doing so at the age of 65.

"It was clearly a tremendously important achievement," says Alexander Maitland, friend and authorised biographer of the Middle East explorer Wilfred Thesiger. "As a British traveller - and as a Scotswoman, of course - she was clearly important enough to be part of that heritage of British women going back to Hester Stanhope (1776-1839), followed by Lady Anne Blunt (1837-1917), Gertrude Bell (1868-1926) and Freya Stark (1893-1993). She was very much a part of that. She was very interesting in that her visit prefaced another visit of some importance made in 1938 by Princess Alice, Queen Victoria's longest-living granddaughter, who went with her husband across Saudi Arabia from west to east.

"One should not underestimate the importance of Lady Evelyn doing the journey - being the first British-born woman to make the Haj - and of course the book she wrote about her journey."

Despite never officially converting to Islam, and with no record of her doing so in front of an imam, Lady Evelyn's Muslim faith - as the Scots-born daughter of a British aristocratic family - was nevertheless quite remarkable, not least in an era when Islam possessed a somewhat exotic reputation within British society.

"She was certainly unusual, being a Muslim," Maitland says.

"Changing from being a Roman Catholic to a Protestant or a Protestant to a Roman Catholic, or even diverging from Christianity towards Buddhism - all these were comprehensible and had some precedent. But, to embrace Islam was something very different. And, in that sense, she was even more extraordinary than (English explorer) Harry St. John Philby, who converted to Islam in 1930, and was close to Saudi King Abdulaziz. This set Philby apart from his contemporaries among British travellers, political agents and ambassadors and other people who were involved in the area."

On its publication, Pilgrimage to Mecca, taking the form of a diary, was favourably received by the British press. The Manchester Guardian, for instance, wrote that the "book has a rare appeal of its own … If she may be thought to be a little prejudiced in favour of her adopted faith, we have been accustomed to hear in its disfavour so much which is based upon pure ignorance and antipathy that a little over-praise, if such it be, comes as a welcome relief."

And, indeed, with passages that included a vivid account of her relief at finally being granted special permission by King Abdul Aziz of Saudi Arabia to perform the Haj pilgrimage - "I had for so long lived in alternate fits of hope and despair, that I can scarcely credit that my great wish is at last to be fulfilled" - and of entering the Mosque of Mecca for the first time - "I am lost to my surroundings because of the wonder of it … I had never imagined anything so stupendous" - the critical acclaim appeared entirely justified. So, why did this exceedingly intelligent woman's contribution to the west's understanding of Islam - not to mention her groundbreaking journey - almost disappear from view?

"There are a number of reasons," says Angus Sladen, Lady Zainab's great-grandson. "My suspicion is that in British society - the British establishment - she was regarded as a very major eccentric, and maybe a bit snobbish. And, probably in the academic world and the theocratic world in the UK, I think she was regarded as somewhat lightweight. They didn't think she was that serious and was perhaps doing things for effect rather than for reality. Those who were studying the Muslim world probably thought she hadn't been well-educated in their view. Her education was from governesses and that was it. So I don't think they took her seriously at all."

William Facey, editor of the 2008 publication of Lady Zainab's Pilgrimage to Mecca, concurs with this assessment, adding that her "three publications were regarded as lightweight travel writing - as indeed they are, if compared with works by Gertrude Bell and Freya Stark. What is remarkable about her books is not any quest for objective description, but how personal and heartfelt they are, qualities that in her case come across to the sophisticated modern reader as naivety."

William Facey, editor of the 2008 publication of Lady Zainab's Pilgrimage to Mecca, concurs with this assessment, adding that her "three publications were regarded as lightweight travel writing - as indeed they are, if compared with works by Gertrude Bell and Freya Stark. What is remarkable about her books is not any quest for objective description, but how personal and heartfelt they are, qualities that in her case come across to the sophisticated modern reader as naivety."